This is the next installment in my series of articles on the DICOM standard in which I want to introduce you to a charming little DICOM server called Orthanc that is powerful enough and production-ready and yet is simple enough to use in the subsequent articles in this series. In this tutorial, we will learn to quickly install and configure Orthanc server and then quickly perform a DICOM echo/verification using Fellow Oak (fo-dicom) DICOM toolkit as well as a standalone DICOM command line testing tool to verify basic connectivity. In the subsequent tutorials, I will cover DICOM network-related operations such as C-Find, C-Move, C-Store, etc by using this server and hopefully illustrate what happens during many communication-related operations using the DICOM standard. Let's go!

When building DICOM applications, one actor that will almost always be present in the overall workflow is a PACS system. PACS stands for Picture Archival and Communication System. A PACS system typically comprises of several sub-components namely imaging machines(called 'modalities' in DICOM) where images may be generated , a mechanism for distribution and exchange of these images securely, facilities in the form of workstations and other mobile devices to enable viewing, processing and interpretation of these images as well as a mechanism for storage and retrieval of these images (as well as related documentation and reports) in the form of digital archives. PACS systems come in all shapes and sizes consisting of one or more of these components and vary in cost and complexity. For our tutorial series, my goal is to illustrate many DICOM-related network operations using one such PACS system namely, Orthanc DICOM Server.

“Coding like poetry should be short and concise.” ~ Santosh Kalwar

Orthanc is a production-ready DICOM server was built using a popular DICOM toolkit/library called DCMTK which has been around for a long time. Orthanc seems to have been primarily developed at the Department of Medical Physics the University Hospital of Liège in Belgium by Sébastien Jodogne. The source code for this server is copyrighted under the GPLv3 license. Orthanc DICOM server is very popular and has been deployed in numerous research as well as commercial situations around the world. It can be installed on any computer (supports Windows, Linux and OS X at the time of this writing) and can be considered a "mini-PACS" in terms of its feature set and has been designed to be lightweight and standalone and requires very little administrative overhead. Besides being easy to install and configure, Orthanc also provides a simple web user interface and supports various DICOM services such as C-Move, C-Store and C-Find SCU. It also supports a REST API to enable integration of DICOM data within non-DICOM applications.

Installing Orthanc is very easy. It took me only two minutes to install and configure the application to be able to talk to small .NET client that I wrote. The installers for the various operating systems that are supported can be found here. The steps to download and configure the Orthanc server on the Windows operating system are specifically described at this location. The instructions for install and configuration on other operating systems vary and so always refer to the latest documentation on their website. Also, please read the information provided in the FAQ section, or contact their support team directly for any questions. Once you have completed the install and configuration steps, you should be able to use the web interface (called Orthanc Explorer) and follow along with the rest of this tutorial. 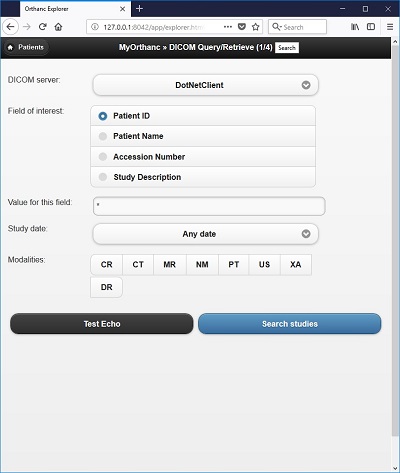 Once the Orthanc server set up has been successfully completed on your machine, you may wish to upload some sample DICOM images into it to enable you to get a quick feel for its user interface and its features. Please seen screenshot below showing me uploading a set of sample DICOM images into Orthanc using the "Upload" screen. Command line upload is also available. In real-life, you will most likely pull images from a remote destination such as a modality or another PACS system into Orthanc Server instead of performing a manual upload. However, that is beyond the scope of this quick overview of its features. 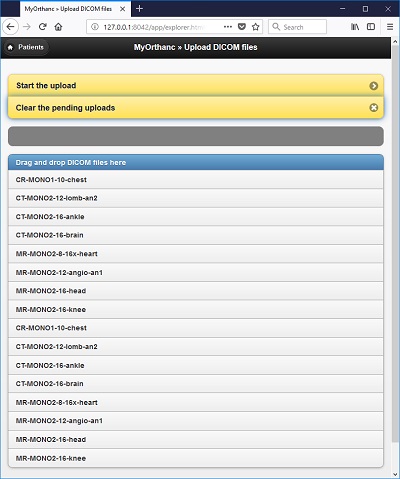 Some Notes on Orthanc Configuration

Orthanc Server enables you to control many aspects of its behavior using a special JSON formatted configuration file that is found under the "configuration" folder where the application is installed. There are sensible defaults for most settings and you don't need to change any of them for playing around initially. However, the DicomModalities setting is something you would need to change when you are setting up connections with other DICOM service providers during testing. See screenshot below of my configuration file on my local machine showing how this setting is utilized. Firewalls are another thing to consider in the overall scheme of things as DICOM traffic is not through HTTP typically and so, DICOM-related ports (inbound and outbound) have to enabled as well. You can also use the log files as well as use the verbose/trace options when running Orthanc Server to see more details when it is running, and you need to troubleshoot issues. Please see their FAQ section for more details. 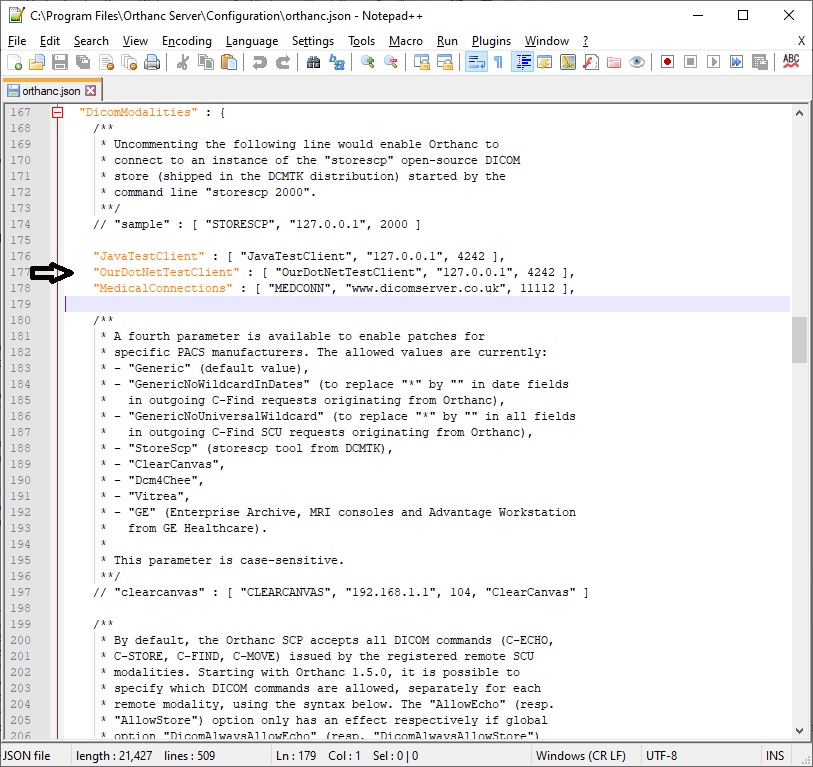 For the purposes of illustrating a basic echo verification (called 'C-ECHO' in DICOM) with this server as part of the initial set up, I will be using a freely available and powerful DICOM toolkit called fo-dicom DICOM Toolkit. This is a completely stand-alone DICOM toolkit that implements functionality such as DICOM file and directory processing as well DICOM networking-related operations. This toolkit is completely free for both commercial or non-profit use. The use of this toolkit in my tutorial does not in anyway imply my official endorsement of it for implementing a production application. Every situation is unique, and only you are ultimately in the best position to decide that. This article is also not meant to be a tutorial on the Fellow Oak DICOM Toolkit, and my focus here is simply to tie DICOM theory to what a practical (although simple) implementation might look like. So, if your goal is to learn how to use the Fellow Oak DICOM library, I would encourage you to visit its website itself or check out the fo-dicom issues pages for details.

Much like my previous programming examples, I will use the most bare minimum code and approach to help illustrate the concepts that I cover in this tutorial. This means that the code I write here is best suited to simply show the concept that I am trying to explain and is not necessarily the most efficient code to deploy in real life and in a production setting.

To get started, you will need to configure a few things on your machine including a .NET development environment as well as the Fellow Oak (fo-dicom) DICOM library before you can run the example if you want to try this out yourself.

We are going to use the same DICOM verification client we developed in the earlier tutorial on DICOM C-Echo verification. This is one of the first steps undertaken in the discovery protocol before any other DICOM-related information exchanges are undertaken between the communicating devices. Please note that in DICOM both devices need to have their peer information registered on each other's system before any communication is typically allowed ("old school security"). This also happens to be one of the frequent issues that arises when setting up DICOM connectivity between two devices. The code illustration shows a small .NET client communicating with an Orthanc DICOM server that is running locally on my machine. See my earlier DICOM tutorials for setting up a devevlopment environment to work with PixelMed. The results of the connection are shown in the screenhot below.

Results of running the program is shown below. You can see the client establishing the association with the Orthanc Server, invoking the C-ECHO operation on it as well as closing the association. If there are any errors during the association establishment or if the connection was aborted by the remote party, those will be logged to the console as well. Congratulations if you were able to successfully connect to a DICOM server running locally or remote. There is lot more to learn about DICOM networking but hopefully, this gave a small taste for what is involved.

Other Tools for Connectivity Tests

Yet another way of troubleshooting and verifying DICOM connectivity is to use any number of DICOM testing tools out there. The one that I have used in the past and have liked is DCMTK. The toolkit comes with many standalone testing utilities that help you test various aspects of DICOM through a command line interface. The echoscu is the one that will be very useful in our situation as we want to verify if our installed Orthanc application responds to DICOM "ping requests" from other DICOM-enabled applications. This command implements the Service Class User (SCU) functionality for the Verification SOP Class. It helps send a DICOM C-ECHO message to the Orthanc DICOM server which is the Service Class Provider (SCP) for the Verification SOP class in this case and waits for a response. The command takes two parameters namely hostname of the device you are connecting to and the tcp/ip port number that you are communicating through. Screenshot of the command line operation performed on my machine is shown below for reference. If you see any issues with this on Windows, then try launching Orthanc manually instead of running it as a Windows service and repeat the same steps.

This concludes my short tutorial covering Orthanc server which we will utilize for some of the subsequent tutorials in my series of articles on the DICOM standard. If you have any questions or comments regarding this tutorial, please feel free to send me an email. Please note that I may not get back to you right away due to work and other commitments. In my next tutorial in this series, I will dive further into DICOM networking operations. See you then.