On the Origins of Language

A few weeks ago, I watched Mr. Barack Obama being sworn in as the forty-fourth president of the United States. At the end of his inauguration speech, I reflected on the events leading up to his election. For me, what stood out very clearly during his campaign was the show casing of his incredible oratorical powers, a skill that seemed to neutralize whatever strengths his opponents had, as well as down play any of his weaknesses. I was also very impressed by the communication skills displayed by his campaign committee through the media to help mobilize millions of Americans, especially their younger generation, to raise funds for his campaign, as well as inspire them to go and vote at both the party as well as presidential polls. The combined power of his speeches along with his campaign advertising galvanized people not only in the United States, but across the entire globe as well. I could not recall a single time in the last few decades when a politician spoke in such a inspirational manner, and rallied a people towards change. For me, his election also helped confirm that oratory skills are an asset to hone and develop even in these times. Also, the timing of this swear-in ceremony could not have been any better as I had just read several books regarding the origins and the development of language which would help humans emerge as the most dominant species on the planet. 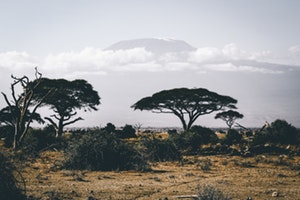 The essence of the few books that I had read was that around 6-8 million years ago, the climate of Earth started getting colder as it headed for another ice age. The forests of Africa were increasingly turning into an open savannah forcing some species of primates to come down from the trees and walk upright (also known as “bipedalism”) in search for food. Bipedalism offered many advantages to these animals, such as being able to easily spot any predators waiting to ambush them as well as appear more threatening to them if they did have an unfortunate encounter. Walking upright also helped free the hands of these proto-humans, permitting them to carry more food as well as dabble with their hands. Later, when the adaptation of the opposing thumb occurred, this allowed them to hurl projectiles during hunting. The increased success in hunting because of these adaptations enabled these ancient hominids to eat a more calorie-rich carnivorous diet. This would lead to an increased brain mass for individuals in this species. Yet another advantage of walking upright was that the larynx of the members of the species would descend lower. This change enabled these early humans to handle vowels and consonants better. The increase in brain mass was followed by the emergence of an area of the part of the brain called “Broca’s area”, which is thought to be the main area responsible for speech and communicative gestures in humans. These developments would result in the formation of a primitive language among early humans. Although the use of past and future tenses in speech (as well as other more complex forms of grammar) still lay in the distant future, this rudimentary language still greatly helped to improve the communication and co-ordination needed by our ancestors, especially when they hunted in groups for large prey.