This is part of my HL7 article series. In this tutorial, we will look at another framework called NHAPI Tools that builds on top of the NHAPI framework and provides many additional capabilities including more advanced message validation features. If you want to ramp up on the prerequisite knowledge/background required to following along, have a look at my earlier articles in this tutorial series.

We saw in my previous tutorial "HL7 Programming using .NET and NHAPI - Message Validation" that the built-in features to support message validation are not as extensive in the NHAPI Toolkit when compared to the original HAPI HL7 toolkit for Java on which it is based upon. However, this toolkit offers a flexibile design which enables developers to address these limitations by extending the core validation framework if/when necessary. NHAPI Tools is a very useful framework that builds on top of the flexible design provided by NHAPI and provides many additional capabilities for HL7 software developers in the .NET ecosystem. You will recall that I had earlier used this toolkit to transmit HL7 messages to a remote party. NHAPI Tools provides many other useful features like this including support for generation of acknowledgement messages, support for custom message segments as well as ability to read HL7 message data directly from files. In this tutorial, I will review some of the message validation features built into this framework. Let us get started.

The App.config file and Runtime Configurability

Before we proceed further, we need to understand how application configuration works in general within the .NET framework. This is a huge topic in itself and I will simply cover just enough here to make sense of how NHAPI toolkit utilizes this as foundation to provide a "runtime configurability" approach to message validation. 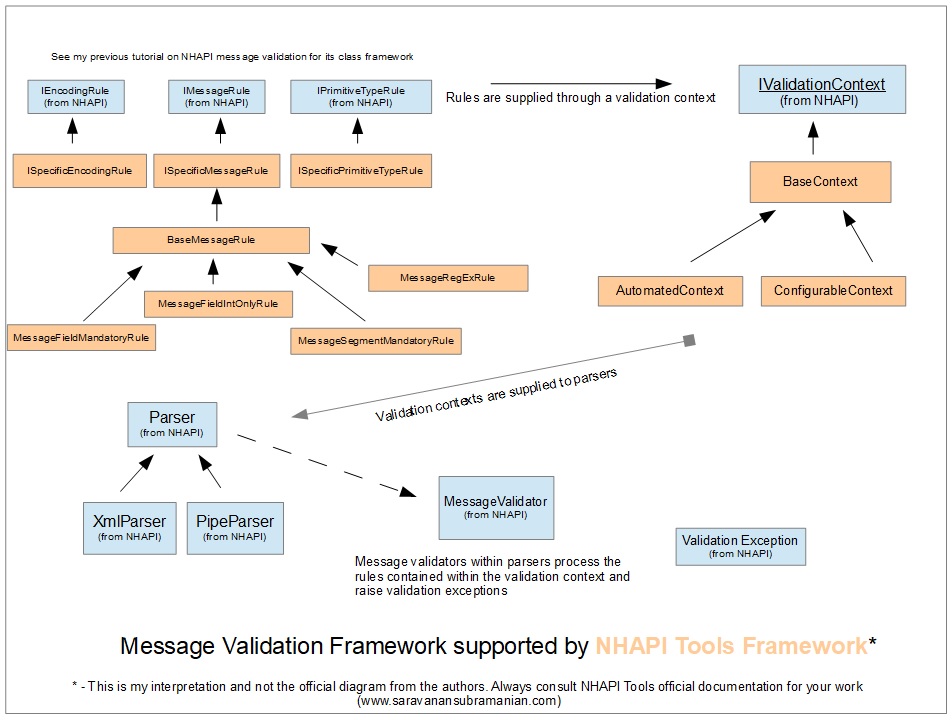 The illustration above shows the overall design of the validation framework provided by NHAPI Tools and how it extends on the NHAPI base validation framework that I had covered in my earlier tutorial titled "HL7 Programming using .NET and NHAPI - Message Validation". As you can see, this toolkit provides some additional rule classes as well as two new validation contexts that enable control over both the specificity as well as run-time configurability of validation rules pertaining to HL7-related encoding as well as message, segment and field data. Let us look at how these work using a couple of small but focused examples.

“We patronize the animals for their incompleteness, for their tragic fate of having taken form so far below ourselves. And therein we err, and greatly err. For the animal shall not be measured by man. In a world older and more complete than ours, they are more finished and complete, gifted with extensions of the senses we have lost or never attained, living by voices we shall never hear. They are not brethren, they are not underlings; they are other Nations, caught with ourselves in the net of life and time, fellow prisoners of the splendour and travail of the earth.” ~ Henry Beston

The AutomatedContext is a special validation context class that simply loads all message validation rules that are located in a specific .NET assembly. The NHAPI Tools framework looks for a specific setting in the "app.config" file called "NHapiRulesNamespace" for the assembly information. I will illustrate how this validation context works by looking at a contrived example that we had seen in my earlier tutorial on basic message validation. We will specify a message validation rule class called "Hl7Ver23AdtA01MessageMustHaveEvn4DataRule" which extends the "ISpecificMessageRule" class. This rule class specifies that any HL7 verion 2.3 ADT A01 message should always contain data in the EVN-4 field.

The output of running this program is shown below. A validation exception is thrown by the HAPI pipe parser when processing any HL7 version 2.3 ADT A01 message that does not contain data within the EVN-4 field.

“All men make mistakes, but a good man yields when he knows his course is wrong, and repairs the evil. The only crime is pride.” ~ Sophocles, Antigone

Another type of validation context provided by NHAPI tools is known as "ConfigurableContext". This type of validation context takes a different approach by enabling you to specify the message rules you want to apply during message processing using a couple of custom configuration sections with the the "app.config" configuration file. Any message validation rules specified here are included as part of any message processing done by the parser. NHAPI Tools also provides a number of pre-built message validation rules called "standard validation rules" that help make life a bit easier for programmers. These special rule classes reduce the amount of coding by enabling you to provide message validation rules simply by specifying them as configuration settings within the application configuration file. As you can see from the screen capture below, all that is required is to provide a rule name and additional details such as the specific Hl7 version and the specifc message type as well as related trigger event of the message they apply towards.

The output of running the configurable context validation is shown below. A validation exception is thrown by the HAPI pipe parser when processing HL7 version 2.3 ADT A01 message that do not contain any PID message segments.

In addition to the rules shown here, NHAPI Tools offers a few additional pre-built validation rules. I will let you explore these on your own as they operate along the same principles explained in this tutorial. See the tool's GitHub page for more details.

In this tutorial, we looked at some additional message validation capabilities provided by NHAPI Tools. This library can be a very useful tool in our toolbag when building message validation functionality within .NET-based HL7 custom applications. It provides many benefits such as run-time configurability, additional specificity as well as helps reduce coding when dealing with common message validation requirements. In addition to the message validation-related capabilities covered in this tutorial, there are many additional features offered by this toolkit. However, I will leave them for your own exploration. In the next tutorial, I will provide a quick tour of other tools and concepts that you should be aware of such as "message conformance" and "message profiles" and why these are necessary for any HL7 integration initiative to be successful. See you then!