Ascent of Man by Jacob Bronowski

After seeing this book repeatedly quoted and referred to in several other good books that I had read in the past (including Carl Sagan's), I finally found time to read it recently. I managed to read this in a week as I devoted almost all my leisure totally absorbed in what I consider as a must-read book for all humans.

I can’t even come close to describing the exhilaration I felt after reading what is essentially a grand outline of human thought and progress over nearly 4 million years. When the last chapter, the last page and the last word of this gem of a book had come and gone, I felt rather sad than happy because of the quick realization that the author is no longer around to guide us with his deep insights on human nature (he died in 1974, just two years after I was born). Bronowski was a brilliant man, and articulates his encyclopedic knowledge of arts, science and philosophy very beautifully in this book. 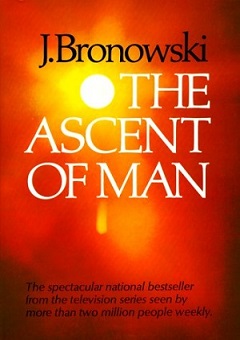 I loved this book primarily for three reasons. The first reason is that Bronowski treats all forms of human knowledge to be equally interesting and considers them to be very valuable for the continued success of the human civilization. This also happens to be one of my own recent personal revelations as I increasingly see the importance of a well-rounded education to be effective in the workplace and elsewhere. For example, reading calculus or geometry without understanding the historical events leading to their inventions hundreds of years ago deprives the students of the many interesting details of the events leading to the formulation of these concepts in the first place. Besides allowing one to have a better grasp on these topics, this approach should spark our creativity to help build/enhance these ideas even further. The proof of the success this approach brings seems to be all around us: namely, the greatest minds in our societies co-incidentally also happen to be people who have a deep knowledge on the historical development of several seemingly unrelated areas. My guess is that this allows them to see the “big picture” rather easily and carry and “cross-pollinate” ideas across different domains.

The most wonderful discovery made by scientists is science itself. ~ Jacob Bronowski

The second reason why I loved this book is because it captures the lives (and the tribulations) of many great minds that have helped advance several branches of human knowledge. Bronowski covers the lives of all kinds of thinkers, ranging from mathematicians, artists, astronomers to philosophers who have lived and died on this planet since the dawn of the first civilization to the twentieth century. Some of the people covered include Pythagoras, Copernicus, Galileo, Newton, Darwin, Wallace, Mendel and Einstein. I was particularly inspired by the story of Alfred Russel Wallace (who co-founded the theory on evolution with Charles Darwin, and yet seems to be relatively unknown to many people, including me). Wallace’s life is beautifully captured in this book. His passion for the outdoors and nature, the adventures of his travel along with his beautiful optimism for life despite the many setbacks he suffers will leave any reader with an increased zest for living, and should make the reader to deeply appreciate the beautiful planet that we live in.

Finally, the third reason is because Bronowski emphasizes the importance of scientific awareness even for the layperson. In one of the last chapters of the book, he states "Science is a tribute to what we can know although we are fallible", and he stresses the fact that all information that humans have managed to gather over many millennia is still imperfect, and that we have to treat this fact with humility, and must work on clarifying them further to help expand the possibilities for us as well as other life on this planet. His narration of the holocaust, and of the dogma and hatred that seems to haunt humankind to this day is also beautifully captured.

This book apparently grew out of a BBC TV series that I am yet to watch. But, if the video is even half as good as the book, it should be an incredible treat. I had a strong temptation to read this book all over again but decided not to as I have several other great books still waiting to be read. And so, it will be many months at least (or maybe years) before I come back for a second reading of this beautiful book. I hope you read this book too. If you do, I would love to hear what you thought of it as well. Happy Reading!!!